You are at:Home»News»Andy Ruiz Jr. Upsets Anthony Joshua, Flipping the Script for the Heavyweight Division 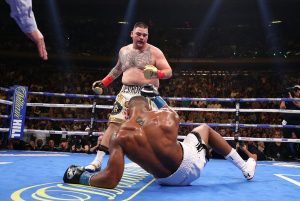 Just when fans thought the best new Heavyweights were doomed to never again cross paths, barred by promoter conflicts and the predictable outcomes of self-interest, the sport teaches us a familiar lesson: you never know what can happen in boxing.

Few of us will claim to have seen this coming. Sure, plenty gave Andy Ruiz Jr. his due credit as a pugilist; fast hands, decent skill, and a sufficiently tough constitution. But it wasn’t supposed to be enough. Anthony Joshua had survived the power of a vengeful Wladimir Klitschko, and had handled every ranked contender since with relative ease. He had yet to face certain tests, namely Deontay Wilder’s brash power and Tyson Fury’s enigmatic style, but the fact that neither jumped at the opportunity to face him only seemed to add to the legitimacy of his reign. He was, for all intents and purposes, the baddest man on the planet.

So how did this happen?

The first step to understanding the unexpected is to don the magical spectacles of hindsight. Joshua had never showed obvious holes in his game. His guard was solid, he controlled the distance well, his punching form was correct and responsible. But even so, his somewhat stiff and robotic stance would see him awkwardly shying away from shots on occasion. Parker and Povetkin both provided fleeting glimpses of a fighter who, when caught leaning out of position, would rather hide from the onslaught in clumsy clinches than face it with his eyes open. It was this largely unspoken knowledge of Joshua’s shakiness stored in the back of our minds that made us feel the uncertainty of a potential fight with the Bronze Bomber, despite an obvious gulf in technical ability.

Which leads us to what we couldn’t, or perhaps refused to properly gauge in Ruiz. The Mexican-American didn’t necessarily show us anything new last night; he merely proved that it could actually work against the best.  By stepping back outside of Joshua’s reach, targeting the body from a low angle, and exchanging up top with precision and bravery, Ruiz laid bare what their contrasting physiques had obscured: picture-perfect muscles can’t compensate for a lack of head movement, and well-drilled combinations and counters aren’t any less dangerous for the flabby rolls of blubber that shake when throwing them.

It’s a stark wake-up call for any top fighter, the lesson being that fame is no substitute for the very best of you that this sport demands.

If the boxing world is still reeling from the uncertainty of what went on inside the ring, the aftermath outside the ring is even less clear. Did mega fights between Joshua and Wilder or Fury lose their value? Perhaps. Or is it possible that a number of lucrative possibilities have opened up for all involved? There will certainly be talk of a rematch between Ruiz and Joshua, boosted by a cinematic storyline, and Fury, Wilder, Ortiz, Whyte, and Parker (along with their promoters) might take this new shake-up as an opportunity to climb the ladder of success.

Whatever paths the big boys choose, one thing is clear: glory can only be earned with whatever they bring into the ring with them. Andy Ruiz understood that perfectly well, and will continue to reap the rewards long after last night.