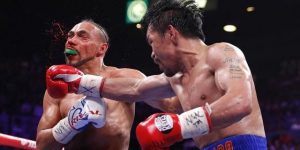 Manny Pacquiao was declared the victor in his World Championship bout with Keith Thurman after 12 hard-fought rounds.

The Filipino legend began with a quick start, dropping Thurman in the first with a quick right hook-jab hybrid, and controlled most of the first half of the fight. Thurman adjusted in the second half of the fight, winning multiple consecutive rounds by pressing Pacquiao behind a jab, targeting the body, and landing clean right hands. In the tenth round, however, Pacquiao continued to throw combinations and hurt Thurman badly to the body. Both fighters exchanged hard punches throughout.

With this victory, Pacquiao becomes the oldest welterweight champion in history at 40 years of age. This win marks yet another remarkable chapter in a his legendary boxing career.