You are at:Home»News»Kovalev and Canelo Announce Surprise Megafight for November 2nd

On paper, Kovalev is a huge challenge for Canelo. While Canelo has fought at the Super Middleweight Limit of 168lbs, most fans would agree that his most natural fighting weight is currently the Middleweight limit of 160lbs. Against Kovalev, Canelo would be ceding just two inches in reach, but also four inches in height. Aside from having a disadvantage in natural size, he’ll have to face a style that maximizes the difference in dimensions. The jab is an essential part of Kovalev’s game, and a tool that Golovkin used well against Canelo in the pair of fights most fans seem to have Golovkin winning. The right hand that follows it can-and has-meant instant defeat for men much bigger than the Mexican superstar. 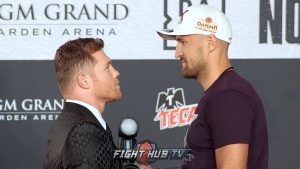 In practice, the fight may turn out to be timely match-making from Team Canelo. Kovalev has shown a measure of vulnerability to the body before, particularly in his last fight against Anthony Yarde, and Canelo excels at landing accurate well-placed body shots. The version of Kovalev that Canelo faces may not be quite as sharp or durable as the one that outboxed Bernard Hopkins and took Andre Ward to a razor thin decision. But even so, this fight is yet another indicator that Canelo is dead-set on leaving a legacy of having fought the most dangerous opponents available.

Whatever the outcome, this match-up has gone from puzzling oddity to intriguing legacy fight in the imaginations of boxing fans. Given the styles at play, the intrigue is sure to be matched by a quality display of skill and violence.