Despite finding ourselves in a relatively uncertain period of transition in the sport, 2018 was a positive year for boxing fans, with a number of big fights between the elite and all-out wars reminding us all why we love the sport.

Golovkin and Canelo faced off in what turned out to be a violent and closely contested rematch. Deontay Wilder came from behind in a thriller against the avoided Luis Ortiz before facing Tyson Fury in a superfight that delivered drama to the Heavyweight division once again. Across the pond, Anthony Joshua added to his already impressive resume by testing himself against the different styles presented by Joseph Parker and Alexander Povetkin.  Cruiserweight king Oleksandr Usyk gave us two great fights against Mairis Briedis and Tony Bellew, reaffirming his dominance and creating hope for a run with the big boys a division above. Lomachenko faced tangible adversity for the first time in years against fan-favorite Jorge Linares. Sor Rungvisai proved that his wins over Chocolatito were no fluke in a tough decision win against Fransisco Estrada, and the Light-Heavyweight division gave us several juicy upsets, starting with Adonis Stevenson’s draw against Badou Jack and subsequent KO loss to Oleksandr Gvozdyk, accompanied by Sergey Kovalev’s KO loss to Eleider Alvarez.

Plenty of other bouts such as Hurd-Lara, Jacobs-Derevyanchenko, Porter-Garcia, Whyte-Chisora 2, Warrington-Frampton, Dogboe-Navarrete, and the brutal affair that was Saucedo-Zappavigna kept each division marching towards progress and the promise of new fights on the horizon. Many more bouts not listed here did just the same. Hopefuls became established contenders, top contenders became champions, and reigns at the top came to an end.

Beyond the fights themselves, fans were treated to the surprise of a new alternative to the Pay-Per-View model enter the market in the form of subscription streaming service Da Zone (DAZN), along with the departure of longtime boxing cornerstone, HBO. Many mourned the loss of such a hallmark production, and just as many celebrated the end of what came to be seen as a worsening commentary team and failing ability to house the best fights available. In either case, HBO’s lack of commitment to a functional boxing budget meant that a formal end could only lead to better possibilities.

But perhaps the best part of 2018 was the feeling that the best was still to come. For nearly every big bout witnessed across each division, there is a better one waiting. So let’s pause the reminiscing and look forward to what the new year has to offer.

Shortly after Anthony Joshua’s exciting KO victory over Wladimir Klitschko, few disputed that the next torchbearer of the division would be anyone but him. With Tyson Fury’s inspiring return and Deontay Wilder’s ascent to legitimacy, this is no longer the case. Fans had hoped that the winner of Fury-Wilder would emerge as a clear candidate for unification with Joshua’s numerous titles. What we got was perhaps just as exciting; a dubious draw that left questions as to who would be more fit to challenge Joshua for supremacy. Fans are eager to see whether Wilder can make enough improvements to keep Fury down the next time around, or whether Fury can add to the skillful display that saw him win a majority of the rounds.

Whatever the outcome, an eventual dance with Joshua is a must. It’s not too early, nor is it too late. Joshua has already defeated the most worthy alternative contenders available. An Usyk bout would no doubt intrigue us, but it’s a bout that can wait (and probably should, for Usyk’s sake.). 2019 must give us an undisputed champion. To paraphrase Oliver Stone’s Alexander, no more than Earth has two suns, will the heavyweight division bear two kings.

The decline of Sergey Kovalev and Adonis Stevenson, whose careers ran as parallel title reigns instead of intersecting legacies, has opened up a number of opportunities for new talents to establish themselves in the division. Dmitry Bivol’s technical perfection, Artur Beterbiev’s bulldozer aggression, Oleksandr Gvozdyk’s clubbing accuracy, and Eleider Alvarez’s stiff straight-punching must begin their introductions to each other this year. The division has not seemed quite so stacked in recent memory, and fans deserve for promoters to make the most of it instead of hiding behind the excuse of botched negotiations.

Any conversation around Golovkin’s career will undoubtedly invoke discussion of Canelo Alvarez. While most felt Golovkin had edged the first fight “close but clear”, their second fight painted a muddier picture. And even for the majority that did score the fight for Golovkin, Canelo seemed to win the event in the eyes of observers, many of which criticized Canelo’s passive defensive movement and lack of aggression in the first fight. He stood in the center of the ring and challenged Golovkin to go toe-to-toe, and brought about instead a role reversal in which Golovkin moved and jab against a stalking power-punching Canelo. 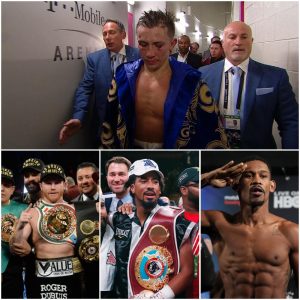 A third fight seems equal parts redundant and unnecessary. On one hand, Golovkin already beat Canelo in the eyes of most and has more to lose than gain in a third bout. With the judges eager to give Canelo a consistent edge on the cards and 37 not far off, what hope does Golovkin have of vindication? I thought we already got the supposedly fired up indignant going-for-the-knockout Golovkin in the rematch, and he chose to box more often than trade with the Mexican. A victory over another top Middleweight contender might prove less lucrative, but could afford him a meaningful win that adds to his legacy. A Jacobs rematch, a Demetrius Andrade, a Billy Joe Saunders, a Jermall Charlo.

On the other hand, Golovkin’s career will always be in some way defined by his bouts with Canelo, and no other opponents stand out in terms of elite-level ability or lucrative potential. Canelo himself would similarly have a hard time finding such an equal dance partner in the near future, even if he did try to venture into the pool of Super-Middleweights. That said, the marketability of his own name carries more weight than any of his opponent’s ever would.

Whatever the case may be, let’s hope that Golovkin gets some kind of closure as he writes his last chapters, before he surrenders his legacy to the judging eyes of history.