As many of his supporters predicted, Joshua was able to make adjustments to his style that maximized his reach advantage. Constantly moving and relying on a varied but firm jab, Joshua ensured that he never found himself trading punches at close quarters. Ruiz on the other hand seemed mostly content to rely on Joshua’s purposefully limited offense for counter-punch opportunities. This time around, Joshua made sure to keep his balance when following up with hard right hands, and rolled back from Ruiz’s counters with much greater anticipation. Ruiz was never able to close the distance consistently, and his efficient footwork from the first fight looked slow and plodding against Joshua’s newfound mobility. 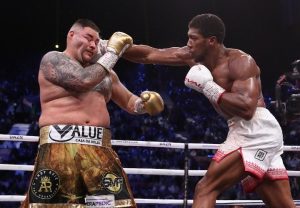 It is interesting to note that Joshua still appeared quite vulnerable at close-quarters, most often when falling in for a clinch or retreating without throwing. While Joshua certainly corrected his strategic mistakes, there are technical vulnerabilities that his team has avoided rather than corrected. Regardless, Joshua showed an impressive capacity to improve and adjust, while Ruiz failed to bring anything new to the table.

On the official scorecards, Joshua won 10 of the twelve rounds for two of the judges, and only one for the third judge. Many of our posters had given Ruiz one or two additional rounds, but none can say that the victory was undeserved.

Going forward, the Heavyweight Division remains full of intruigue. While Ruiz will have to prove himself worthy of another big fight in the future, especially after his post-fight comments about not preparing as well as he should have, Joshua has several mega-fights waiting in the wings. A fight against the winner of the Tyson Fury vs. Deontay Wilder rematch would surely be the biggest fight of the year, while undefeated elite former cruiserweight Oleksandr Usyk continues to establish himself in the heavyweight division. Whatever match-ups ultimately come to fruition, one thing is clear: Anthony Joshua is back.