Errol Spence has taken another step closer to ruling the welterweight division and climbing the pound-for-pound rankings by unifying the WBC and IBF Welterweight Championship titles against “Showtime” Shawn Porter. The outcome of this fight appeared to be a pre-determined consensus in the minds of boxing fans. Porter, however, refused to consider himself the lesser fighter, and gave what was likely the best performance of his career. 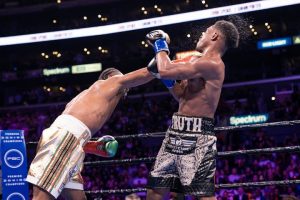 Early on, Porter relied on the boxing ability he claimed has been underestimated. Circling to his left and pumping the jab before jumping in with straight right hands, it became apparent that Spence was not used to the combination of handspeed and footspeed Porter employed in his ambush tactics. As the fight went on, Porter continued to press his athletic advantages to bully Spence backwards and fight him on the inside, landing awkward uppercuts and body shots. But Spence was prepared to dish out punishment at close quarters. While Porter relied on volume and surprise, Spence was landing the more accurate power-punches, particularly straight lefts over the top. The rounds were fought at a frantic pace and difficult to score, and like unofficial scorer Marcos Villegas, I had the fight even going into the 9th round.

As the physicality of the fight took a toll on both fighters, their expected roles almost reversed; Spence was eager to press the action and do damage while Porter moved on the outside looking to counter-ambush. The 11th round tipped the scale for Spence when he caught Porter with a big left hand as Porter shifted his weight into it to throw a left hook. While Porter wasn’t badly hurt, the knockdown gave  Spence confidence in his attack and the cushion of a two-point round. After the final bell, a split decision reflected the competitive nature of the fight, but most fans seem to agree that Spence deserved to win the fight. 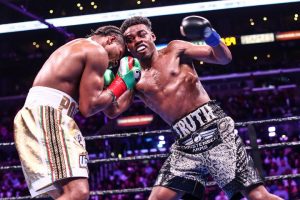 There were more than a few surprising things we learned in this fight. One is that Porter has been improving his boxing game, sharpening his movement and increasing his ring awareness. At least six different times, Spence would press Porter against the ropes , only to have Porter change the angle on a pivot and force Spence onto the ropes. It was also susprising to see Spence so vulnerable up close, unable to fully block and roll with the numerous combinations Porter was throwing. But ultimately, “the Truth” we knew going into the fight ultimately decided it: in a war, Spence was always going to take Porter’s shots better than Porter could take his. Whether that truth continues to serve Spence in difficult fights against Crawford or Pacquiao as it did against Brook and Porter remains to be seen. Until then, fans must be content with seeing Spence take on Danny Garcia.