You are at:Home»Fight Reports»Golovkin Defeats Derevyanchenko in Razor-Close Unanimous Decision

Last Saturday night saw yet another elite-level match-up give us great action and close cards. Gennady “GGG” Golovkin defeated by Sergiy Derevyanchenko in a competitive but unanimous 12-round decision in Madison Square Garden, scoring a knockdown in the first round. The victory crowned Golovkin with the vacant IBO and IBF Middleweight titles. While fans undoubtedly enjoyed the fight, some have voiced their discontent with the decision, and more will feel there are questions surrounding Golovkin’s future. 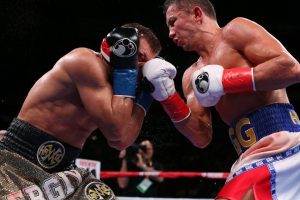 On one hand, Golovkin was fighting a top-level opponent with a difficult technical style. Derevyanchenko had proven his quality in a competitive draw with former champion Daniel Jacobs, who himself took Golovkin to a razor-thin decision. On the other hand, Golovkin looked defensively inept at times, letting himself get pressed straight back and getting hit with multi-punch combinations. Even though Golovkin won his rounds by taking back control of the center of the ring with the jab, he often reverted to swinging one or two big, telegraphed shots at a time. This allowed Derevyanchenko to stay small, get inside, and work Golovkin’s body while pivoting off difficult side-angles. Golovkin appeared hurt to the body several times, something rarely if ever seen before. Golovkin’s new trainer Jonothan Banks expressed disappointment at the performance, and with good reason; it seems that Golovkin’s usual flaws are worsening, and he’s not able to compensate offensively as effectively as usual. 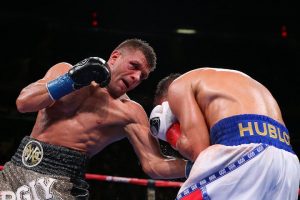 The obvious question remains: does a third fight with Canelo make sense at this point? Or does Golovkin risk damaging his legacy by fighting past his best against the younger rival? Canelo himself has said that GGG doesn’t offer him anything anymore in terms of legacy. Whatever the case may be, Golovkin would do well to contemplate a rematch with Derevyanchenko. If he can improve on his performance and dominate the Ukranian technician, a third fight would be more than deserved. But a failure to separate himself from Derevyanchenko a second time would likely signify that Golovkin’s time at the top is at an end.