You are at:Home»Previews»Jono Carroll v Guillaume Frenois-Fight of the week

On television this weekend,we in the UK get the privilege of seeing world class operators like Vasilly Lomachenko and Kell Brook,as well as the exciting and brash ‘pretty boy’ Josh Kelly. If we turn our attention away from the stars for a minute though.I believe the best match up of the week takes place on Sky sports between Jono Carroll v Guillaume Frenois,who meet in a final eliminator for the IBF world super featherweight title.

Irishman Carroll aka ‘King Kong’ cuts a distinctive figure with his huge beard and crazed stare. Fast turning into a fans favourite with the hardcores,this Saturday comes his first real exposure to the big time. Sky sports televise from Sheffield arena. Headline act and local hero Kell Brook is in what should be a ‘ticking over’ fight v another ‘pretty boy’,this time Aussie Michael Zefera. The real competitive action however should be in the bouts proceeding with Kelly taking a legitimate step up v the capable and experienced Russian David Avaneysan at welterweight. And our man Jono and the Frenchman Guillaume Frenois in what could be a career defining fight for both,and has been recognised by the IBF as a gateway to their world title held by elusive American Tevin Farmer. 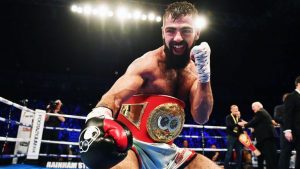 Jono Carroll is quickly becoming a favourite amongst fans

For those so far unfamiliar with Carroll,this should be a lively introduction. Carroll’s style is that of a relentless pressure fighter. 3 ko’s out of his 16 bouts to date gives a misleading representation of Carroll’s power and aggression. He will force the pace cutting down the ring,and look to unleash 2 handed assaults to the body. The experience gained from having to walk down well schooled boxers in his career best wins over Declan Geragthy and John Quigley should stand him in good stead v Frenois.

This is Carroll’s first fight back with Matchroom promotions. The first time around coming off the back of his prizefighter victory in 2014. Back then he took the trophy home after upsetting far more experienced opposition in the form of Gary Buckland and Stephen Foster jnr. In contrast Frenois is the far more accomplished of the two. A former undefeated European super featherweight champion.Frenois will be featuring in his 48th professional contest v Carroll. Despite the vast experience gained,the majority of his career has been spent at home in fights where he would have been a massive betting favourite. His one reverse came against the tough Italian Devis Boschiero back in 2013 in what was an unsuccessful challenge for the European title.

Stylistcally this appears to be your stereotypical pressure fighter v boxer clash. With both being southpaws and Carroll’s need to get to work on the inside I wouldn’t be surprised to see some untidy clashes early on which could result in cuts. Frenois style is classic European with the high guard and in and out footwork. He likes to steal space and hold the centre of the ring from the footage I have seen and that will need to be his key to success on Saturday night. Frenois has been the championship distance of 12 rounds on nine seperate occasions,and we have no reason to question his durability or stamina based on previous appearances. He isn’t a big puncher and will look to rack up points with straight shots and move safely out of range. Possible weaknesses are his reliance on working in straight lines,and not having the power to deter the forward march of Carroll. Heart can be took for the Irish camp from the fact his previous setback was against a similar style of opposition in Boschiero.

I can’t pretend to not have a vested interest in this fight. Carroll’s character and his fan friendly style has made him a firm favourite of mine,and as a route to world honours in what is one of the deepest weight classes in the sport,Frenois is about as straightforward as you will get. All that being said,this is Carroll’s toughest opponent to date by some distance. Carroll succeeded v Quigley and Geraghty by making them fight his fight. And he will need to repeat that again here,though Frenois is a front foot fighter,he isn’t aggressive in his approach so Carroll will want to dictate the pace,take centre ring and take the Frenchman out of his comfort zone. Carroll can and will lose rounds v good opposition and I wouldn’t be suprised to see Frenois take an early lead in Sheffield. Watching the Frenchman on tape though I think Carroll will be too fresh,and has too much variety and aggression to be defeated. I predict a reasonably clear points win for Carroll in a tough battle.

The prize for the victor,title holder Tevin Farmer is a different proposition entirely,as James Tennyson found out to his cost. A win here for ‘King Kong’ in his typical style though,and I would expect there to be many more people in the Jono Carroll fan club for when that fight materialises.