None of us were expecting much from the RIZIN exhibition match between Floyd Mayweather Jr. and Japanese kickboxer Tenshin Nasukawa. Not having fought against any professional boxers save Conor McGregor (in his pro boxing debut) since 2015, Floyd was not expected to take on a serious threat. Tenshin is the size of a boxing featherweight with no professional boxing record, and while he is undefeated, his prowess lies in a sport that allows him to creatively implement kicks-something he would be denied against Mayweather.

Yet a quick look at his career highlights and training camp videos suggested to the casual observer that he might at least be able to put on an “interesting” performance against the aged retiree, if nothing else. Surely that would be enough for Japanese fight fans and media, although as Floyd said in their most recent press conference, whether the fans tuned in this time around has no real effect on his purse. 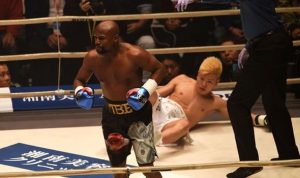 Once the fight-if it could be called that-unfolded, such illusions quickly evaporated. Floyd began the opening round casually stepping forward and probing with lazily outstretched arms, a mocking smile on his face. Tenshin edged back nervously before feeling his back touch the ropes, and seized the opportunity to counter a lazy jab from Mayweather with a snappy straight left counter. Floyd continued to press behind a high guard, this time throwing power punches with intent, but Tenshin’s confidence grew by the second, landing combinations to the head and body that Floyd partially blocked without taking a step backward. Before the round was halfway over, Floyd’s grazing left hook sent his overmatched opponent sprawling onto the floor. He didn’t seem too badly hurt and fought back fiercely, until Floyd unleashed a torrent of rights to the body and head, dropping him hard twice more before the corner threw in the towel.

The first thing I felt upon watching this event was confusion. Why was Floyd so eager for a stoppage? Perhaps he felt he could take risks he normally couldn’t with such a gap in size, skill, and experience, and aimed to deliver the rarity of an early knockout. Even so, the bout was only scheduled for 3 rounds; surely Floyd was capable enough at this stage to carry the 20 year old a round longer and give us a novel display of tricks and taunts. 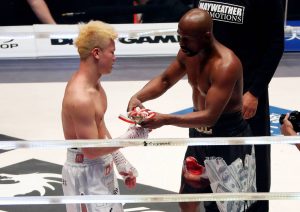 While many boxing fans (including myself) derided the McGregor fight as a circus fight, there was at least an element of spectacle that somewhat justified the farce. And afterwords, McGregor’s brand remained mostly unaffected, and fans soon forgot any resentment over the anticlimax of inevitability. But I couldn’t help feel a sense of tragedy in watching young Nusukawa cry, sob, and cry some more after being rag-dolled in front of his countrymen. One gets the sense that he cared very much about putting on a respectable performance, and perhaps didn’t quite understand the magnitude of the challenge. He was paid handsomely, but we can only hope that any physical or mental damage won’t follow him into his next fights.

Once you stop laughing at the sheer ridiculousness of the event and outcome, there’s not much entertainment to be had from a mismatch like this. Floyd is too busy counting the figures from his purse to worry much about fan contentment, and to be fair, nobody is forcing us to watch these so-called freak shows. But it’s hard to ignore the bad aftertaste left by this useless beating. If Floyd wants to continue making money through exhibition-style events, let’s hope he tries a little harder to make the joy of the spectacle outweigh the triviality.