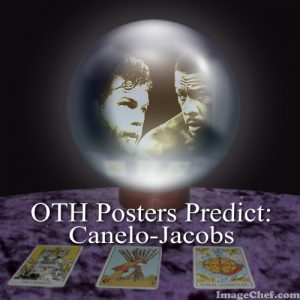 Boxing fans, journalists, gamblers, and fighters themselves are no strangers to voicing their picks for the winner of a championship fight. Canelo-Jacobs is widely considered a 50-50 fight, a rare but pleasing rarity in a Middleweight unification bout of this magnitude. But could anyone in the boxing world truly love fight predictions more than the avid forum poster?

Here are some of our featured picks from the Boxing Forum:

“Jacobs’ trainer was pleased to see him throw 96 punches in a round in sparring. It seems their strategy is to outwork Canelo, but in recent years, Jacobs hasn’t really sat down on his punches as much. He slaps too much for my liking which will play out in the fight. Jacobs will come with a high workrate while missing a lot probably. The punches he does land won’t be as eye catching as Canelo’s. Neither fight will hurt the other one. It’ll be a close fight but with Canelo winning 114-114, 115-113, 118-110.”

“I see a high class boxing match,which sporadically breaks out in fire fights not dissimilar to their respective bouts with GGG. Where Jacobs succeeded against Golovkin was in boxing off the line, and throwing in combinations with good head movement.I can see him trying to establish his length early and out-throwing Alvarez, but without having the same ratio of success.”

“I think Canelo will give rounds early, learn the pace and rhythm of the jab and start to time and counter from the 3rd or 4th onwards. He will win by knockout after landing big, single shot throughout the fight.”

“I sense a competitive boxing match which divides opinion once again. LIkely Canelo getting the better and will come out on top if it’s close. But jacobs offering enough resistance to divide opinions.”

“I think this fight screams 12 rounds and technical action. There will be a lot of ebb and flow, but I think Canelo breaks Jacobs down to the body and finishes the fight comfortably in control.”

“We’ve seen most of Canelo’s top level opposition not only take rounds off of him but also take it the full 12, often to a contentious decision at the end. Jacobs is good enough to not only do that but to win over the judges too. Put me down for the upset.”
JeffJ
“I’d say that Jacobs is the busier fighter but Canelo lands the eye catching shots. Plenty of close rounds and a very tight fight.The wild card here is Jacobs chin. If there’s going to be a knock down or knock out, it will be Jacobs on the ground. So, in a fight that is very close, I think Canelo has a bit of an inside track to fairly win it, although I think Jacobs has all the tools necessary to do the job (except, perhaps an iron mandible).”
Want to add your own pick to the mix? Visit our Boxing forum and sign up here
Share. Twitter Facebook Google+ Pinterest LinkedIn Tumblr Email