The rematch between Deontay Wilder and Tyson Fury begged numerous questions for journalists and fight fans alike. Would Fury rise if knocked to the canvas once again? Did Wilder make adjustments to his unpolished style? Was Fury’s change in trainer a fatal mistake? What did both men hope to do by coming in heavier? Would the judges favor either man or evaluate the contest fairly?

But this fight turned out to be nothing like the first. This wasn’t a suspenseful competitive tightrope affair. Instead of wondering what would happen as the rounds unfolded, fans could only guess when the inevitable would come to pass.

From the outset, it was clear that Fury was intent on pressing the action and forcing Wilder to fight going backwards. Landing a heavy jab and following up with right hands as WIlder reatreated on the ropes, Fury was more aggressive than we’ve ever seen. His promise was no bluff; he wanted the knockout, and was imposing his size at every juncture. WIlder attempted to hold his own by lunging in with a few solid 1-2’s early on, but Tyson was able to roll back and resume cutting off the ring. Before long, Wilder was bleeding from his ear, and his inability to fight effectively on the back foot was only exacerbated by gradual exhaustion and wear. A heavy right hand in the third knocked Wilder over, and he never appeared to recover his stamina or balance. In the 5th, a left hook to the body floored Wilder as he retreated with his guard held high. The beating continued until the corner threw in the towel and referee Kenny Balyess stopped the fight in Round 7. 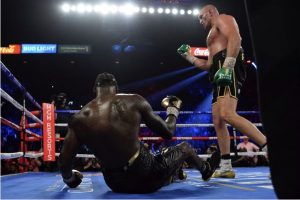 While the one-sidedness of this fight is surely a shock to most viewers, it’s worth noting that the signs were there. Fury’s weight of 273lbs was no accident, but by design, and the knockout-focused strategy of Kronk’s Sugar Hill Steward proved masterful. Fury has always been a versatile fighter, and tonight we saw how effective he could be applying that skill to a masterful strategic adjustment. Wilder will have some soul-searching to do as he contemplates a potential rematch, as he might decide to take on softer opponents while making tweaks to his skillset. As for Fury, there’s only one logical target: Anthony Joshua, fellow Englishman and Heavyweight Champion, ready and eager for unification. For UK Boxing, it doesn’t get much bigger than that.